Japan is well-known for its clean and well-organized cities, compared to those in other countries. One of the key items underlying the cleaning culture is wa-bouki, or the Japanese broom. In this article, we will explore the history of the Japanese broom that was once elevated as a ritual article and later became a commodity item. 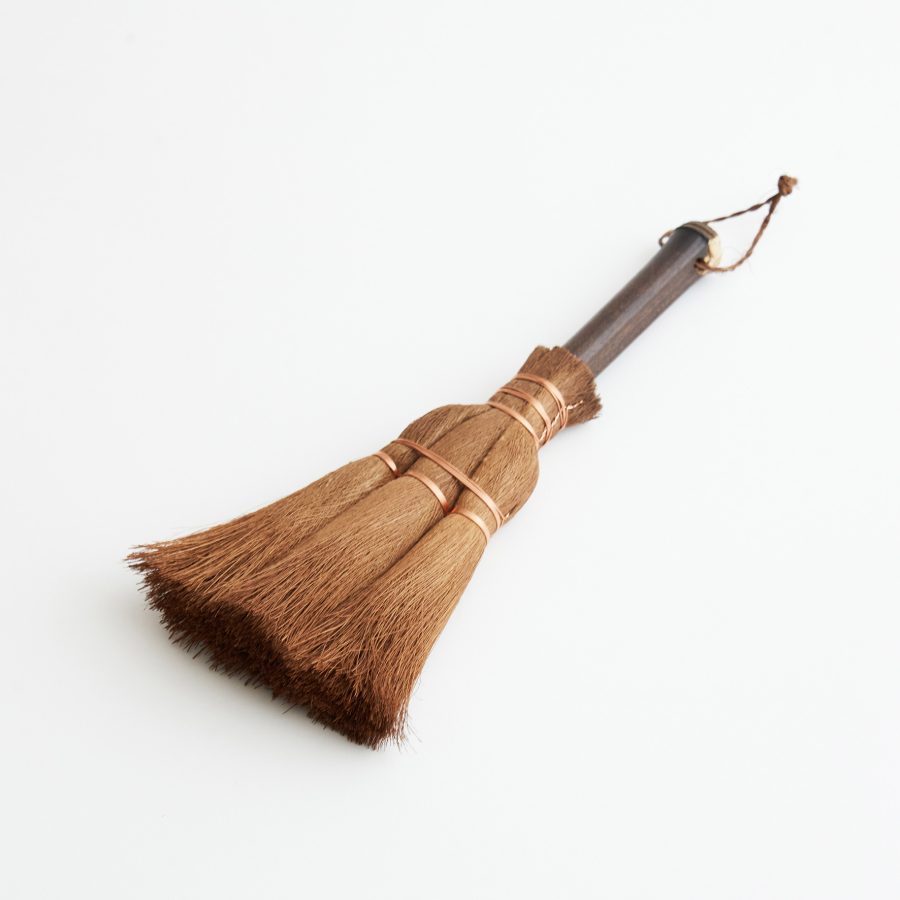 History of the Japanese Broom Dating Back to the Tumulus Period

Japanese brooms have a long history. Although a detailed origin is not known, it was long thought that the “Nenohinometogi-no-houki” broom, stored in the Shoso-in Treasure Repository in Nara, was the oldest existing broom in Japan. However, a broom from the mid burial tombs era was unearthed in 2004 at the Nishi-Shindou Ruins in Kashihara City, Nara Prefecture. The artifact of 45 centimeters in length by 3 centimeters in width is believed to be a hand-held broom, which proves that brooms have existed since a prior era.

The broom used to be called “hahaki” and was used mainly as a ritual article until it started to be used for cleaning in the Heian era. It was first used during the susuharai year-end cleanup at court. The broom for cleaning purposes quickly gained popularity, and the occupation of broom vendor was invented during the Muromachi era.

Zashiki-bouki, the broom specifically for sweeping Japanese-style rooms was developed in the Edo era when tatami mats became available among the general public. With soft and flexible bristles, brooms made of hemp palm were widely popular and preferred. Those made from the plant called “houki-morokoshi” also became the talk of the town as its oil content adds a sheen to tatami mats. Some types of zashiki-bouki, including Edo-bouki and Nakatsugawa-bouki, are still made from this plant.

The Broom as a Ritual Article and Religious Object

There are various anecdotes about the broom as a ritual article. In old books, including the Kojiki Records of Ancient Matters and the Manyo-shu Anthology of Tanka Poems, the broom is referred to as “hahakimochi”, as well as “tamahahaki” or “tamabahaki”, and is found in the myth of the God of the Sun, Amaterasu Omikami, and in a tanka written by Otomo-no-Yakamochi.

The above-mentioned “Nenohinometogi-no-houki” broom of Shoso-in Treasure Repository was also a ritual article. It was thought that a swing of the tamahahaki broom activates the soul and drives evil spirits away, and the broom was used in the ceremony of sericulture following the custom of ancient China.

From its use for sweeping and cleansing, it was also believed by the general public that the god of birth called “Hahaki-gami” resides in the broom, which led to the religious practice of stroking the bellies of expectant women with a broom in prayer for safe birth. There were also customs of placing a broom next to deceased people to drive away evil spirits and raising one at the head of funeral parades. The history of using the broom as a sacred article could be a major factor that shaped Japan’s unique cleaning culture.

The number of brooms is decreasing due to the popularity of vacuum cleaners and the declining use of tatami mats, as well as the increase in Western-style rooms, but brooms have been re-evaluated in recent years. One of the major reasons for this trend is its environment and human friendliness. Unlike vacuum cleaners, brooms are non-electric and emission-free. They are safe and convenient for families with children or pets. Brooms are also handy and readily available for a quick sweep, compared to their electric counterparts.

The key is to move the tip along the mesh of the tatami mat or the grooves of flooring and occasionally change the direction without pushing the tip too hard against the floor. If you rarely use blooms, why not try one out for the upcoming year-end cleanup?