Tokoroten gelidium jelly is especially appreciated in the hot season for its texture that slips smoothly down the throat, refreshing flavor, and transparent appearance. The common food favored by the general public however is actually full of mystery, including the origin of its name and local preferences as to how it’s eaten. This article will focus on various theories of tokoroten about the mystery and charm of the food. 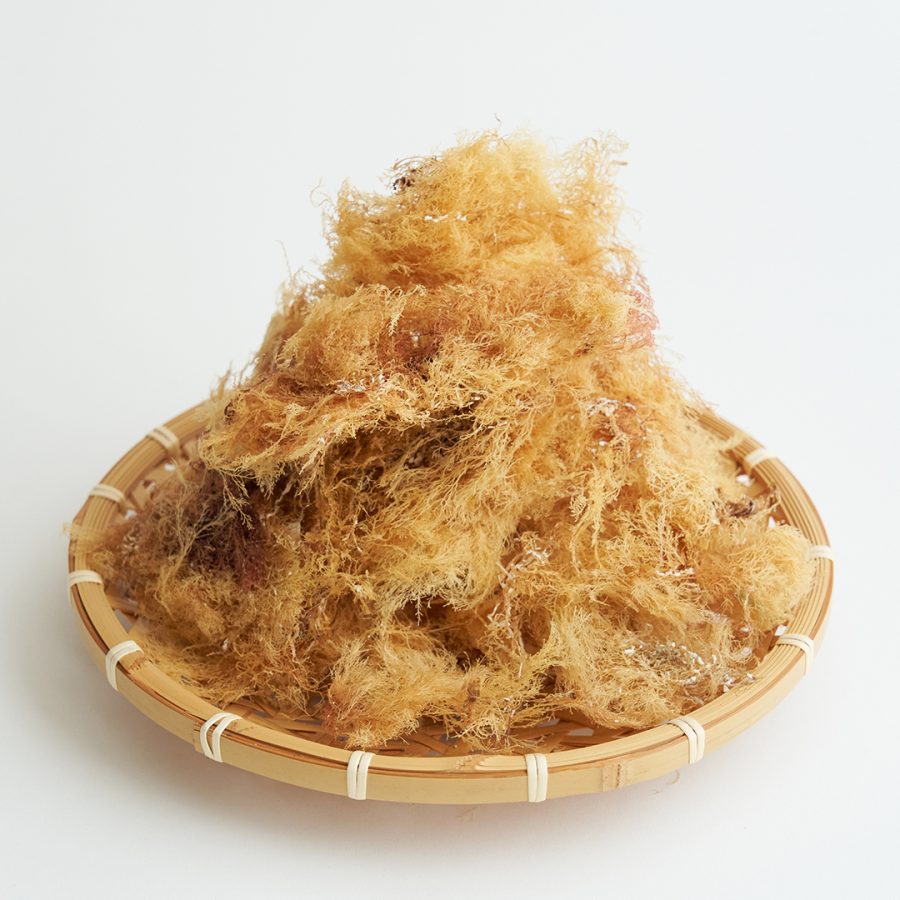 Origin of the Unique-Sounding Name

Tokoroten is a seasonal feature of summer in Japan. Its origins in Japan are yet to be clarified, but it is said that the food was originally introduced to Japan along with Buddhism in the Asuka era in the sixth century or that the manufacturing method was brought from China by missions to the Tang Dynasty during the Nara era in the eighth century.

Tokoroten was only available for noble families until the Heian era, and it was in the Edo era when it finally became accessible for average people. This is the time when tokoroten vendors carrying the food on a pole were first seen in Edo and Kyoto.

The food was initially referred to as “korumoha,” meaning “congealed seaweed,” when the food was introduced to Japan as it is made by boiling tengusa seaweed for its congealing component. The jelly made of tengusa is then pushed through the tool called “tentsuki” to be formed into noodles, and thus the food became called “心天” (“kokoroten”) with the “koru” part of the name of the food changed to “kokoro” along with the “ten” part of the tool. Then “天” changed to “太” to refer to the seaweed, which changed the name of the food to “心太”. The food was called “kokorotai” or “kokorotei” as time went by and reportedly resulted in “tokoroten”.

Another theory explains that these Chinese characters are merely a phonetic equivalent and that the name actually came from the combination of the local word of the Kansai area “togoru,” meaning “to solidify,” and tengusa seaweed. 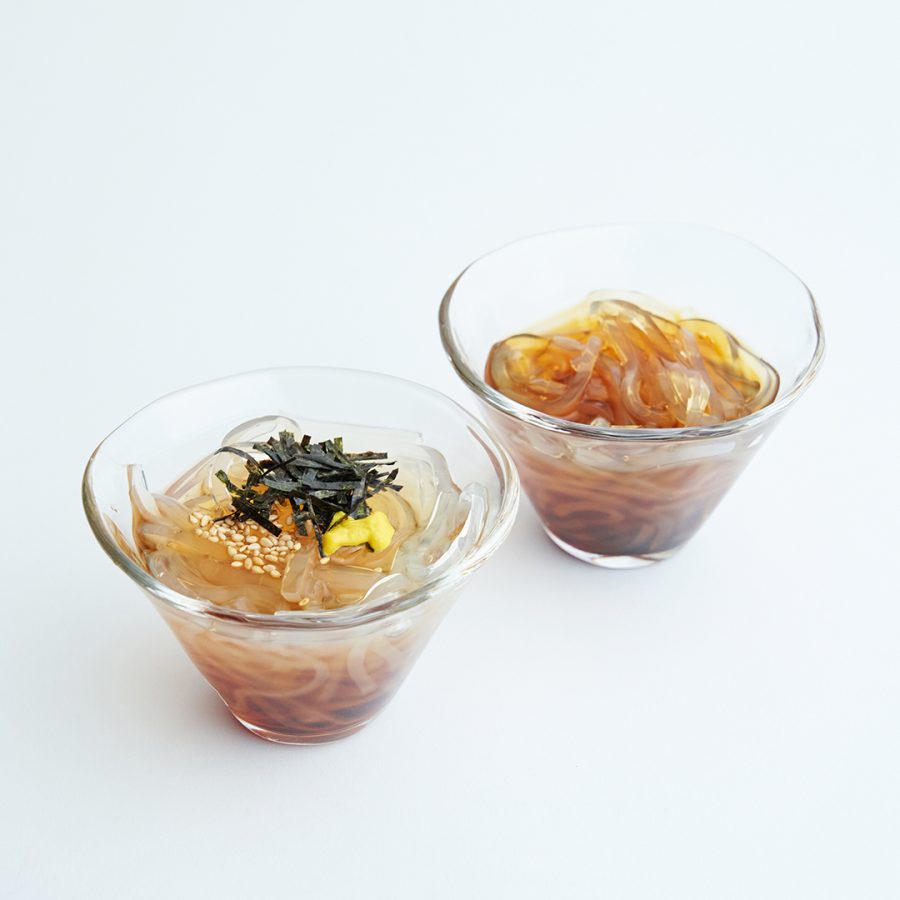 Did you know that tokoroten is consumed differently in the Kanto and Kansai areas? In Kanto, it is eaten with vinegar, soy sauce, and Japanese mustard – often as a side dish. In Kansai on the other hand, tokoroten is commonly seen as a type of snack or dessert and enjoyed with dark molasses and soybean flour.

Various explanations are found for these differences. One of them is that sugar became readily available earlier in Kansai than in Kanto. The original tokoroten at the time it was introduced was eaten with vinegar and soy sauce, which became common nationwide. Among noble families in Kansai, however, sugar from China had already been popular, and that’s how the sweeter preparation was invented. This preference for eating tokoroten with dark molasses in Kansai never changed after the food became available for average people during the Edo era. A large number of sugar wholesalers in Osaka is thought to be the reason why the culture of sweetened tokoroten became established among ordinary people in Kansai. 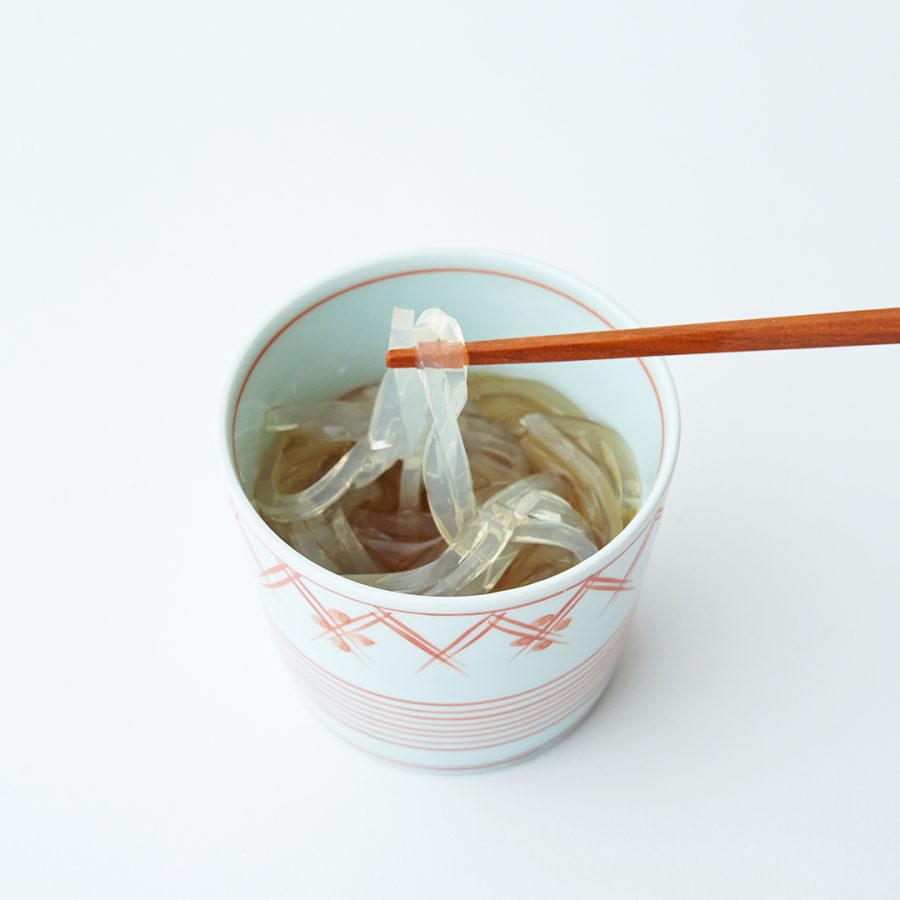 More Local Variations – Use One Chopstick in Nagoya

Different ways of enjoying tokoroten are found all over the country aside from Kanto and Kansai. A particularly interesting way to eat it is seen in the Tokai area and Niigata Prefecture. In these areas, tokoroten is normally eaten with just one chopstick.

Theories about this way of eating tokoroten explain that it is because one chopstick was used to pick up a piece of tokoroten to confirm the level of the food’s solidity – that it wouldn’t break easily. It was also believed to be bad luck if the food was picked up with a set of chopsticks and broke. Additionally, in Nagoya, located right in between Kanto and Kansai, tokoroten is commonly eaten with the sambai-zu sauce, prepared with vinegar, soy sauce, and sweetened sake, so that it can be enjoyed with both sourness and sweetness.

Many other unique local variations for eating tokoroten include the use of the bonito stock made from the local bonito flakes in Kouchi Prefecture, and the use of malt vinegar made from the unrefined dregs of local awamori liquor in Okinawa. Why not enjoy some uniquely prepared tokoroten this summer?