“Somen” Used To Be a Special Treat for Formal Occasions

A popular Japanese summer delicacy, somen fine noodles are especially appreciated on a hot day for their smooth, tantalizing sensation as they slide down the throat. This article will introduce their deep, hidden history and the difference between them and hiyamugi noodles. 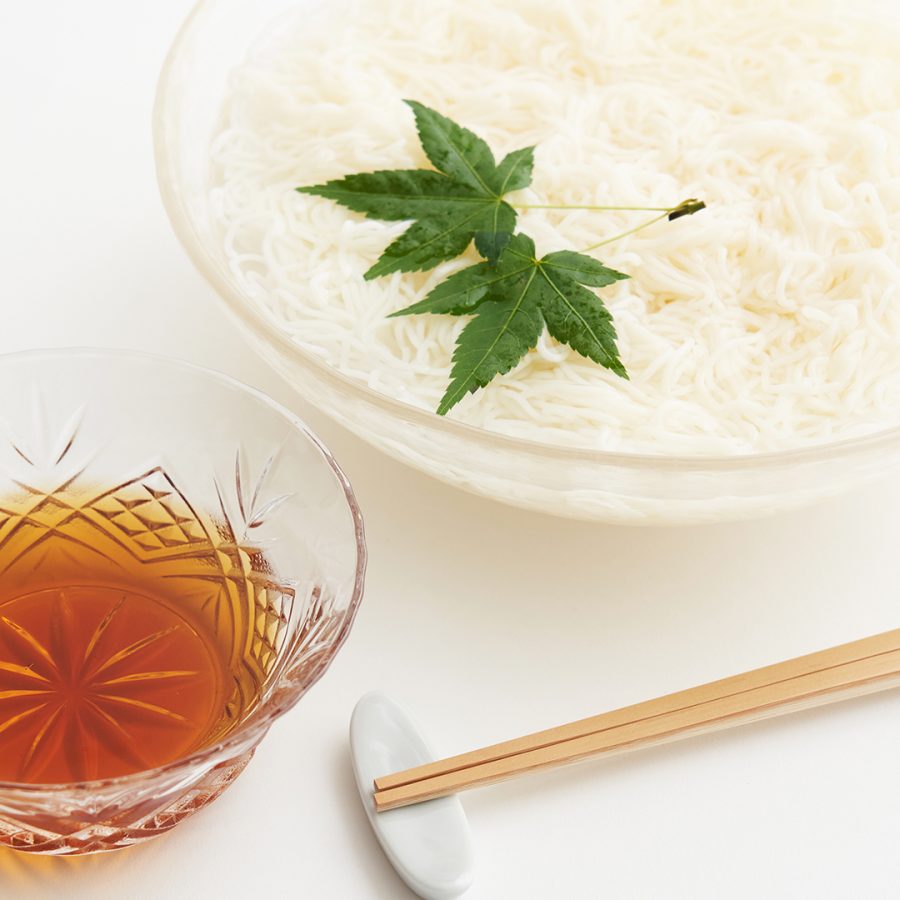 Original form of somen, “sakubei” arrived during the Nara era

What is believed to be the original form of somen is “sakubei,” which came from China during the Nara era. Sakubei is a type of Chinese sweet which is made of rice flour and wheat flour with some salt, kneaded and thinly stretched to be twisted like rope. Completely different from today’s somen, sakubei was thicker than udon noodles and broken with the fingers like bread to consume.

Sakubei in those days was served for a banquet or a formal occasion and eaten by noble people and those of rank during rituals and court events. Later by the Muromachi era, the shape and recipe of the present somen were established, and “somen” and other names began to be used to refer to the noodles. They became common as a snack at temples but still uncommon among the general public.

It was in the Edo era when somen became widely common among people. Somen’s easy preparation and long shelf life were greatly appreciated and made them particularly popular, which led to the common saying, “Somen is synonymous with Banshu; Banshu is synonymous with somen.” 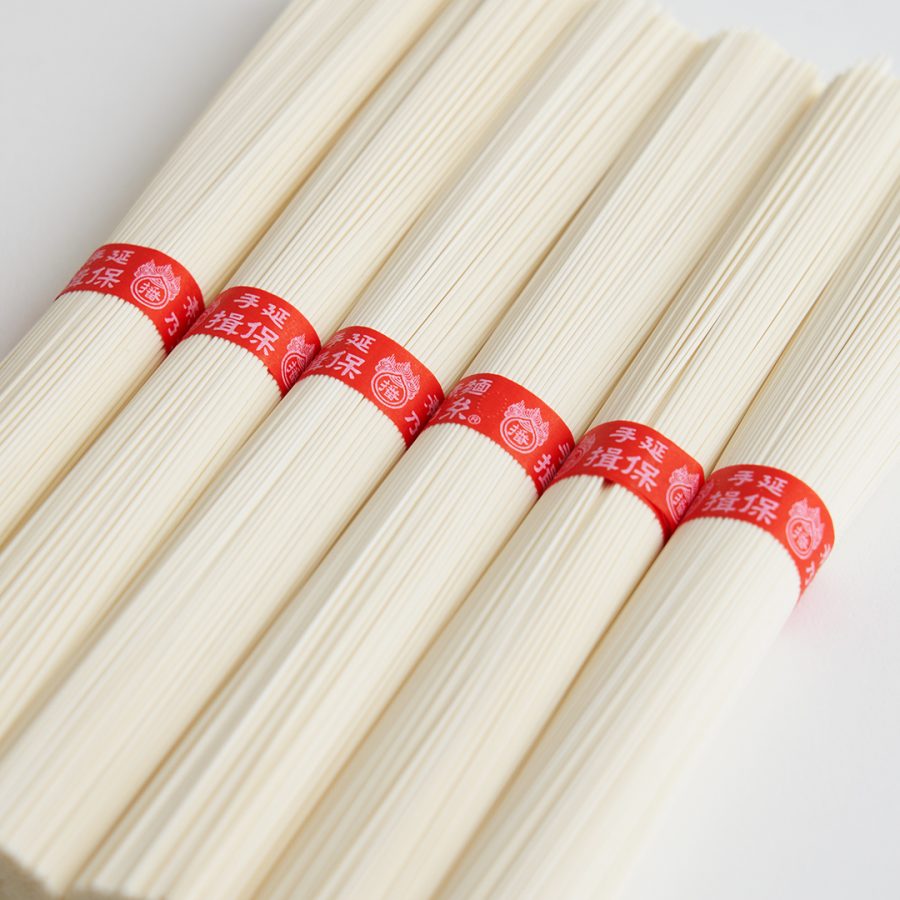 Climate: the Banshu area enjoys a mild climate throughout the year with very little precipitation and relatively warm weather in the winter. High yields of high-quality wheat promoted by the climate, as well as natural blessings such as salt from Ako and abundant water from the Ibo-gawa River, made the area suitable for the production of somen.

History: Banshu Area has a long history of somen production. The ancient document written in 1418 at the Ikaruga-dera Temple of Taishi-cho Town, Ibo County has a reference to “saumen.” Full-scale production of somen started in this area during the Edo era. It is said that it was because Tatsuno Domain promoted its production. The production kept increasing after that, but the increase in poorly made products also became a problem. To solve the problem, the somen producers of Tatsuno, Hayashida, and Shingu Domains gathered and created the “Somen Producers’ Regulation Agreement” document to define and set rules on quality and other items. Further, in 1887 the Somen Trade Association of Ittou and Issai Counties of the Province of Harima (the precursor of the Hyogo Prefecture Tenobe Somen Cooperative) was established to strictly maintain the taste of somen and serve as the foundation of the history of the major production area of the noodles. 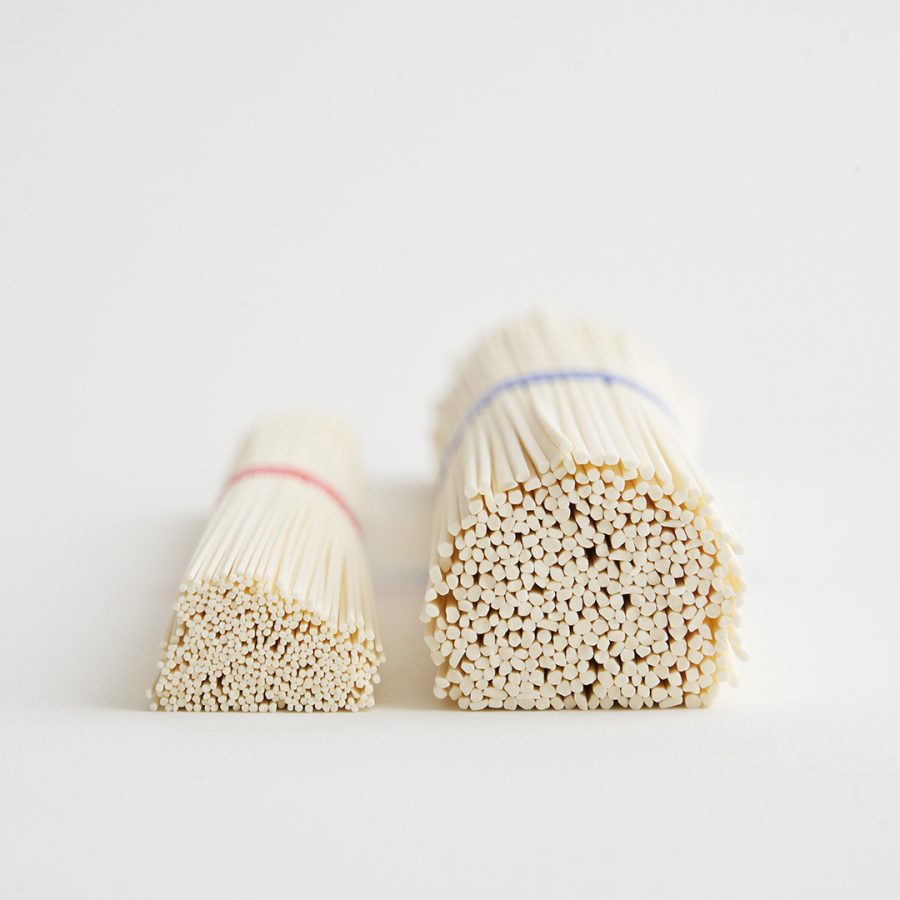 Differences between hiyamugi and somen, and local favorites

Do you know what the differences between somen and hiyamugi noodles are? They are thickness and manufacturing methods.

Thickness: Somen is less than 1.3mm thick in diameter; while hiyamugi is between 1.3mm and 1.7mm. However, noodles of 1.7mm or thinner in diameter can be also called somen if they are tenobe (hand-pulled).

Manufacturing Methods: The two types of noodles have different manufacturing methods. Somen noodles are manually pulled with oil to be as thin as thread, while hiyamugi is made by cutting the thinly rolled out dough into noodles.

Locally developed delicacy somen can be also found all over the nation. Miwa Somen from Nara Prefecture originally made in prayer to ward off pestilence 1200 years ago and Shodoshima Somen of Kagawa Prefecture made with sesame seed oil are listed as the top three somens in Japan, along with Banshu Somen.

Somen noodles with different appearances and flavors are dotted nationwide, such as Ehime Prefecture’s Goshiki Somen with the vivid colors that attracted Masaoka Shiki and other litterateurs; as well as Umen of Miyagi Prefecture that is half in length of regular somen noodles. Why not try and enjoy somen noodles that are just a little bit different this summer?