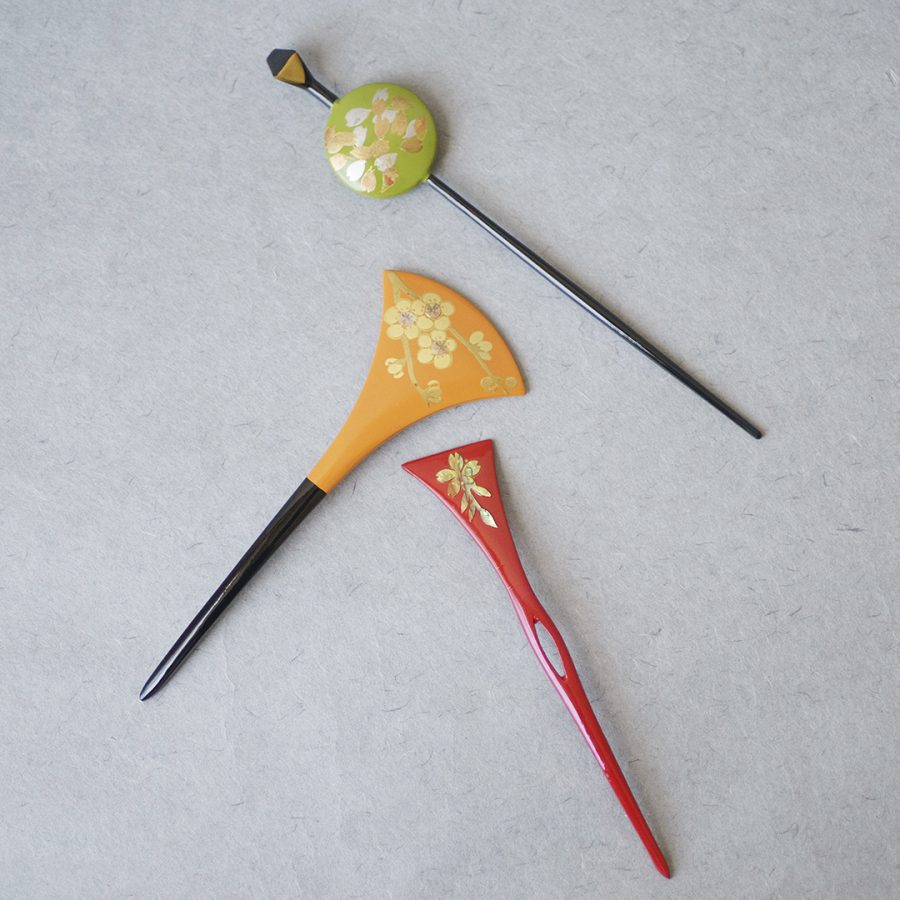 The kanzashi, or a Japanese ornamental hairpin, brilliantly accentuates the beauty of the hair of a woman wearing a festive kimono. There are two theories on its origin. One was that the kanzashi was used as a good luck charm or amulet in the Jomon era. The theory explains that it was believed that a thin stick with a sharp end had a certain type of power in this era and that the stick people inserted in their hair (“kami-zashi”) was later developed into kanzashi. The other theory is based on the word “kazashi,” used to describe the custom of nobles of the Heian era decorating their hair with flowers and branches for religious rituals. The word “kazashi” can be found in Genji Monogatari, a novel written in the middle of the era.

It was during the Nara era when the ornament took the current form of a hair pin. The comb-shaped ornament was introduced from China, and it later came to be called “kanzashi”. As in China, a yuigami, or hairdo, was common for both men and women in Japan. Later taregami, flowing hairstyles, became popular after the dispatch of Japanese missions to the Tang Dynasty was abolished, and kanzashi was rarely used any more.

During the Azuchi Momoyama era, however, kanzashi became appreciated again when women restarted wearing hairdos to imitate the founder of Kabuki theater, Izumo no Okuni. Furthermore, decorations became more emphasized when Nihon-gami (Japanese coiffures) was developed in the Edo era. Various different types of kanzashi, including hanabira (flower petal) kanzashi, were invented, while advanced techniques, such as makie gold lacquer and raden mother-of-pearl crafts, came to be commonly used.

Glass and other new materials were also introduced in the Meiji era, and Western-style designs gained popularity. As more and more Japanese women wear Western hairstyles, there are fewer opportunities to use kanzashi in modern times. However, those that go with Western-style clothing have appeared these days. Kanzashi continues to be loved in different styles as time goes by.